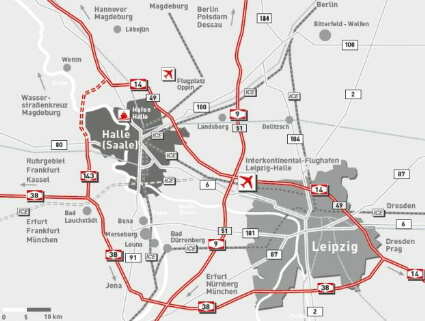 The Leipzig-Halle airport is situated half way between the two cities and is connected by means of the A9/A14 motorways. In addition to this the S-Bahn S 5X sets off at 60 minute intervals from the airport to both Halle (Saale) and Leipzig and at 30 minute intervals during the rush hours.

The main railway station in Halle (Saale) is centrally located. Directly next to the station is the Riebeckplatz, the New Federal State’s most busy traffic junction and also the largest urban roundabout in Germany. This is where a number of trunk roads and tramlines meet thus providing numerous possibilities of travelling to other parts of the town.

Halle is surrounded by four motorways, which are part of the “Central German Loop”. These also enclose the city of Leipzig.

A 143 Westtangente Halle (Under construction)

B6     (From the North Sea coast southwards through the Federal States of Lower Saxony, Bremen, Saxony Anhalt and Saxony, then across to the Polish border)

B91   (From Halle southwards via Merseburg and Weißenfels to Zeitz)

B100 (From Halle to the B2 south of Lutherstadt Wittenberg)